The Boston Area Chapter ISPE vendor show at Gillette Stadium is a yearly highlight on the tradeshow calendar. Because of its location and local presence, it is historically one of the calendar year’s best networking and knowledge-sharing events. This year was the 30th anniversary of the show, and it did not disappoint!

Boston has arguably the most substantial presence of Bioproduction, Biotech, and Cell and Gene Therapy in the United States. It was no coincidence that attendees from many of the largest companies in the industry were present and looking for the next technology or advantage they could implement into their processes. Traffic at the show was back to record levels following the pandemic, and energy was infectious. Attendees were eager to engage and learn from the vendors at the show, which was exciting to be a part of after the momentum was starting to get rolling again last year. 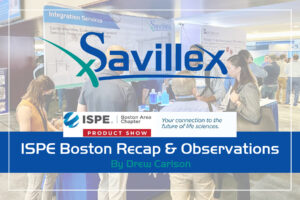 By Eric Isberg - VP of Life Sciences Savillex Life Sciences Success: 10 Years in the Making You’ve probably heard the old cliche about “an overnight success…years in the making.” For our Purillex® brand of life science products, and the incredible growth surge we experienced in 2021, it has felt like

Creating contamination-free life science containers Container cleanliness is important for many life sciences applications. In fact, being simply “clean” isn’t enough. Containers need to be completely aseptic, meaning they are “free of contamination from bacteria, viruses or other microorganisms.”  Although sterilization processes like autoclaving and gamma irradiation can help eliminate

What’s the Issue? This Is the Best Container for Tissues.

The Case for Jars in Tissue Processing  In tissue processing and transplantation, tissue engineering, and regenerative medicine, there’s a growing demand for appropriate-quality containers that can be used from R&D all the way through to product commercialization.  Quite often, containers used during the R&D phase are made from laboratory-grade materials

Can Bioprocessing Evolve to Meet a Rapidly Changing World? It’s a brave new world for the bioprocessing industry as groundbreaking new technologies - like cellular therapies and mRNA vaccines - emerge and hit the market at a blinding pace.  However, behind every one of these technological triumphs is complex manufacturing

Is there a better solution for light-sensitive biologics? Although all biologics are light sensitive to

What’s the Issue? This Is the Best Container for Tissues.

The Case for Jars in Tissue Processing  In tissue processing and transplantation, tissue engineering, and